How to be a social butterfly this holiday season 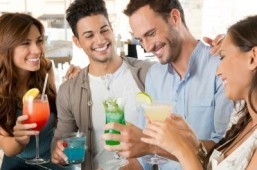 Struggle with small talk? A “shyness” expert offers a host of suggestions on how to become a social butterfly throughout party season.
©Rido /shutterstock.com

(Relaxnews) – Read the newspaper, set an internal time clock and don’t be late to the party — literally. These are among some of the tips offered by a “shyness expert” and psychology professor in the US on how to master one of the most important skills of the holiday season: small talk.

If you don’t want to spend the holidays standing in the corner, pretending to read important emails on your smartphone or stuffing yourself with one too many meatballs for fear of having to engage idle banter with strangers, the director of the Shyness Research Institute at Indiana University Southeast offers a host of “small talk” tips to get you through party season.

According to Bernardo Carducci, the importance of small talk is huge: not only does it  help establish connections between strangers, but it can also generate acts of kindness and make people happy.

“Small talk is important, particularly now when we have people retreating into their own electronic bubbles, their own worlds, where they can get whatever they want on their own terms,” he said.

“The people who are happiest and most influential have the strongest social network, social capital.”

But like all things in life, mastering the art — and it is an art, he says — of small talk requires practice and a certain amount of savvy.

Here are Carducci’s tips on how to leave a party with a few new acquaintances —  Facebook, real-world, or what have you.

Talk, talk, talk
While Carducci claims he’ll talk with anybody, even a “soft drink machine just to practice,” perhaps it would be better to start with acquaintances at work.

“We’re creatures of habit, we see the same people all the time, so that compliment turns into a smile, a more extensive greeting, which can turn into a conversation. That’s how you build social networks.”

You don’t have to be a stand-up comic
Remember, says Carducci, you don’t have to be particularly funny or witty to engage with strangers: “You just have to be nice.” A good way to practice is to find someone’s who’s alone and begin conversation, he says, as there is no pressure to entertain a group of unknowns.

Prepare your intro
Unless you’re a lion tamer or a personal assistant to Kim Kardashian, you’ll need to have a spiel prepared when introducing yourself to others, something that will move the conversation along. For example, “I work at the mall,” is a conversation killer. But “I sell phones at the mall. You won’t believe some of the reasons people want them,” will start a conversation, Carducci points out.

Be on time
If you’re late to the party, you’ve likely missed out on the window for establishing rapports with different people, Carducci says. By now, groups have already formed and conversations are already moving along.

“If you walk in and everything is already buzzing, you’re already behind.”

Be the conversation
Knowing how to move the dialogue along to other topics is also important as it can lead to other interesting conversations.

Stop talking
This requires an internal clock and auto-editing: know when your time is up. That is, try to refrain from dominating a conversation with a topic that may interest you, but doesn’t interest others. Test the waters by stopping periodically to see if others are weighing in or changing the subject.

“Poor conversationalists might feel like they’re on a roll and get excited, and not realize they’re dominating. If people are interested, they’ll ask questions when you stop.”

Don’t be afraid of quickies
Circulate, mingle, make an effort to talk to several different people at the party. One way to move along: “I’ve got to go, there are a couple of people I need to talk to. We’ll talk again later.”