By Nimfa U. Rueda 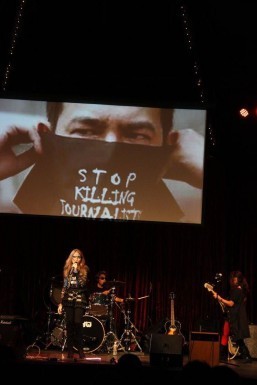 The youth band Back2Jupiter dedicates their performance to the children of slain journalists.

LOS ANGELES – Filipino-American media groups held a photo exhibit and a tribute concert Sunday night (Monday in Manila) in the Hollywood area of Los Angeles to honor the memory of the 32 journalists killed in the Ampatuan massacre.

The show staged by the National Union of Journalists of the Philippines (NUJP)-USA Chapter at the Celebrity Centre International marked the sixth year after the attack that claimed the lives of 58 people, 32 of them journalists, in Ampatuan town in Maguindanao province.

“May we not forget the victims of the massacre and may justice prevail,” said Consul General Leo Herrera-Lim, in his remarks.

Arnedo Valera, legal counsel for NUJP-USA, said the massacre could not have taken place without the “existing culture of impunity” in the Philippines.

To date, none of the suspects have been convicted of the crime. International media groups, including the New York-based watchdog Committee to Protect Journalists (CPJ) and the International Federation of Journalists (IFJ), have condemned the slow progress of the case and the continued killing of journalists in the Philippines. 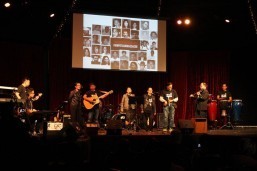 Earlier this month, radio broadcaster Jose Bernardo was shot dead by still unidentified assailants in Quezon City. He was the fifth journalist killed in 2015 and the 169th since 1986, according to NUJP.

“Justice remains elusive,” said former broadcast journalist Thelma Aranda-Sugay, who emceed the event. “Tonight we will keep the story alive and honor (the slain journalists) with songs of hope and remembrance.”

Original Pilipino Music (OPM) icon Florante, the show’s headliner, said he joins the media groups in calling for justice for the victims and supports efforts to help the children they left behind.

“It is an honor to be a part of this show and be the voice for the slain journalists,” said rock musician Joe Awayan, who performed with the newly formed Fil-Am Media Band.

The youth band Back2Jupiter performed an original composition, titled “Maguindanao” and dedicated the song to the children of the slain journalists.

“We’re here for them and we want to help and support them, said 13-year-old Sian Guirao, the band’s lead vocalist who competed on The Voice Kids in Spain.

NUJP-USA produced the event in partnership with the Filipino American Press Club of California, F7 Photographers, Frontliners, Press Photographers of the Philippines (PPP)-USA and Pen and Lens Press Club.