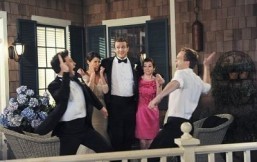 The creators of “How I Met Your Mother” were considering two different endings for the show.
©CBS Broadcasting Inc.

(Relaxnews) – Faced with the frustration of their fans, many of whom were disappointed with the show’s ending, the creators of “How I Met Your Mother” have decided to release an alternate conclusion. This second finale will be available on DVD this fall.

The conclusion chosen by Carter Bays and Craig Thomas, the comedy’s creators, did not live up to the expectations of many longtime fans, who had been following the New York adventures of Ted Mosby and his friends since 2005.

Aired on CBS on Monday, March 31, the final episode drew a record 13.1 million viewers. But for many of those who tuned in, the ending fell short of expectations, leading to backlash across the internet. Some fans even went as far as launching a petition for a new ending.

Now, the creators of “How I Met Your Mother” are responding to their fans’ pleas. Carter Bays announced via Twitter (@CarterBays) that fans will soon be able to watch an alternate ending that was considered before the finale was aired. There will be no need for the cast of the show to re-shoot certain scenes, as the alternate ending will be produced by editing pre-existing footage.

The result will be available in the bonus features on the “How I Met Your Mother” Season Nine DVD and on the complete series DVD box set, both of which are due for release sometime this fall.

Richard Yap likes to move it, move it

NBA teams with Twitter for streaming, but no games