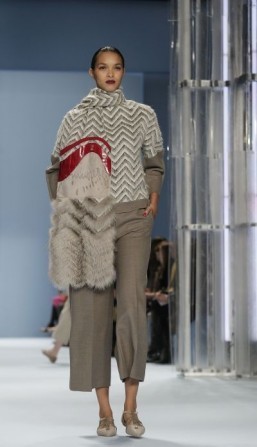 Hundreds of fashionistas, celebrities and admirers poured into the imposing Park Avenue Armory, braving near record-low winter temperatures for a ringside seat at the runway show of the day.

The floor was covered in astro turf to mimic a football pitch. The name Hilfiger was picked out in huge letters and a fantasy scoreboard read: “Home 20, Guests 15” while an entire wall was covered in football helmets.

The Hilfiger silhouette of fall/winter 2015 were projected onto giant screens during the show — again as if at a football game.

The look was sporty, comfortable and elegant, reinventing the 1960s and early 1970s with stripy woolen capes and large buttons, oversized brown coats with large pockets and faux fur trim, sweatshirts and pinafores.

“This is a collection based upon love story meets American sports. I really wanted to blend both luxury and sports together, to get a casual sporty luxurious feel,” the designer told AFP before the show.

American football, he said, was “a great inspiration.”

There was a large red leather poncho with a hood and oversized, striped sleeves, a leather mini dress sporting a 30 anniversary patch, kick pleat dresses, a white faux-fur bomber jacket and cable-knit pullovers. 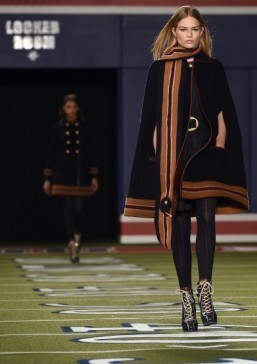 Hilfiger came out at the end to rapturous applause, carrying an American football helmet which he handed to Kraft.

Across town, Carolina Herrera, who has spent 34 years designing timeless, elegant fashion, put on a show inspired by water.

“Vogue” editor-in-chief Anna Wintour arrived backstage before the show, dressed in a black leather and red fur coat, for a quick embrace and to be given a personal look at some of the clothes by Herrera.

Actress Dianna Agron and socialite Olivia Palermo were guests of honor, and also sitting in the front row was Ivanka Trump, daughter of Donald and a businesswoman with her own jewelry, fragrance and footwear company.

American supermodel Karlie Kloss opened and closed the show, which presented grays, blues and whites — broken up with just a splash of red — of suits for ladies who lunch, as well as cocktail and evening dresses.

“I call this collection making waves. It’s all about the elements of water,” the Venezuelan-born designer told AFP, kicking off day five of New York Fashion Week.

Wintour sat in the front row, stifling frequent yawns in what was a packed house despite near record cold temperatures in New York.

“They (the clothes) move in a fantastic way and it’s a young collection,” she told AFP. But she broke with catwalk rules by kitting her models out in flat shoes and boots, rather than towering stilettos.

“It’s very unusual but you will see that they work!” she laughed.

Hemlines bounced, skirts on evening dresses billowed, wave-patterns were picked out in different fabrics and gauze floated like air.

Herrera showed her first collection in 1981, and became a favorite of former first lady Jacqueline Kennedy Onassis. She is today beloved by celebrities looking for elegance on the red carpet.

“You have to be in the future, you cannot go to the past and copy collections of the past,” she said.