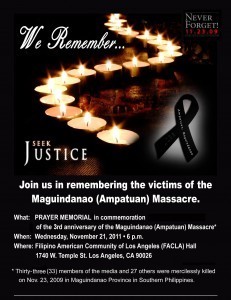 MAGUINDANAO MASSACRE 3RD YEAR COMMERATION: November 21, at 6 p.m., at the Filipino American Community of Los Angeles (FACLA) Social Hall located at 1740 W. Temple St., Los Angeles, CA 90026, hosted by the National Union of Journalists of the Philippines (NUJP) and the Alliance-Philippines and the Justice for Filipino American Veterans (JFAV). The public is cordially invited.

MANILA, Nov 12, 2012 (AFP) – The Philippines’ Supreme Court on Monday banned television coverage of trials related to the country’s worst political massacre in which 58 people died, sparking outrage from the government and media groups.

Reversing its own landmark decision made last year – that for the first time allowed a live broadcast of any trial – the court said showing the proceedings on television would unfairly harm the defendants’ cases.

“A camera that broadcasts the proceedings live on television has no place in a criminal trial because of its prejudicial effects on the rights of accused individuals,” said the the court ruling.

Leaders of a then-politically powerful family in the violence-wracked southern Philippines, the Ampatuans, are accused of orchestrating the massacre of 58 people in 2009 in an attempt to stop a local rival’s election challenge.

The Ampatuans allegedly led a group of about 100 gunmen in stopping a convoy of cars carrying relatives of the rival political candidate, their lawyers and journalists, and then shooting them dead in a remote area.

The family patriarch, Andal Ampatuan Snr, as well as his son and namesake, who allegedly personally led the massacre, are among 75 people currently on trial over the murders.

The Supreme Court’s decision upheld a petition filed by Ampatuan Jnr, who argued that live coverage made him look guilty.

“This is the litmus test of the judiciary and it is important for us, both the public and media, to be able to know what’s going on in the massacre trial,” spokesman Edwin Lacierda told reporters.

The National Union of Journalists of the Philippines, which has a strong interest in the case because 32 of the victims were media workers, said it would appeal.

Nevertheless, television networks had not broadcast the proceedings prior to Monday’s ruling because conditions imposed last year made it impractical.

One of the conditions was that a broadcaster had to show all the court hearings, not parts of them.

Prosecutors and rights groups have warned the trials, which began in 2010, will drag on for years or even decades because of delaying tactics by the defence and as the country’s justice system is overburdened.