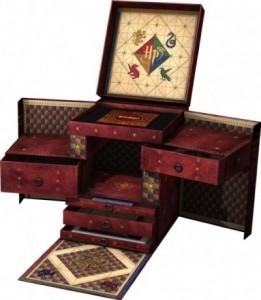 (LOS ANGELES-Relaxnews) – Since Harry Potter fans are no longer awaiting more books or films from author J.K. Rowling, who is readying an adult novel now, devotees can anticipate the ultimate Harry Potter box set on Blu-ray/DVD, available to pre-order now.

The most successful film franchise will get the deluxe treatment with a definitive package containing all eight films, plus a numbered edition of discs with five hours of never-before-seen footage, as well as extended editions in 2D and 3D.

Ultraviolet availability means the digital copies can be stores on the cloud to be streamed on the go.

Plus specially produced, collectable memorabilia items include concept art and a map of Hogwarts.

With the special collector’s box featuring various compartments to hold all these items, the cost reaches US$500, but Amazon is offering the box set at a discounted rate of $350.

The tales adapted from the novel series by J.K. Rowling follow Harry with his friends Ron and Hermione on their epic quest along with Voldemort, Dumbledore, Snape, Hagrid, and Bellatrix Lestrange.

Does Yen Santos still have time for love?

Life After the KO