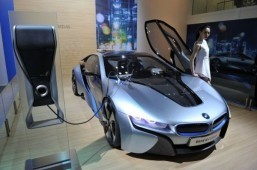 This picture taken on March 28, 2013 shows a South Korean model posing with BMW i8 Concept during a press preview of the Seoul Motor Show in Goyang, north of Seoul. Gas-guzzling SUVs, eco-friendly electric cars and the odd brave attempt to marry the selling points of both are taking centre stage at the biennial Seoul Motor Show.
©AFP PHOTO / JUNG YEON-JE

(GOYANG, South Korea-AFP) – Gas-guzzling SUVs, eco-friendly electric cars and the odd brave attempt to marry the selling points of both are taking centre stage at the biennial Seoul Motor Show.

Carmakers including Hyundai, Toyota, GM, BMW, Volkswagen and Ford are taking part in the 10-day event, with nine models making their global debut as Seoul seeks to catch up with better-known Asian auto shows in Tokyo and Beijing.

Sports utility vehicles, including Toyota’s fourth-generation RAV4, are still the fore, despite their heavy frames and high fuel consumption — long seen as challenges to luring drivers in Asia’s congested cities.

French carmaker Renault gave an Asian debut to its new QM3 crossover — a downsized mix of SUV and passenger car — at an elaborate celebration event.

The colourful orange vehicle, first unveiled at the recent Geneva Motor Show, will hit the market in the second half of this year, said Francois Provost, chief executive of Renault’s South Korean unit.

Renault Samsung Motors is hoping the model will mark a “new beginning” for the firm, which has struggled with sagging sales in recent years, Provost said.

The company also flagged plans to start production of its electric sedan, SM3 Z.E., at its plant in the southern city of Busan this year.

US automaker General Motors gave an Asian premier to the all-electric version of its Chevrolet Spark, heralding it as a “new benchmark” for urban electric vehicles.

Production of the electrically-powered hatchback began at the firm’s plant in the southern city of Changwon earlier in March.

The car’s 20-kWh lithium-ion battery can be recharged to 80 percent of its capacity in 20 minutes, and its electric motor is capable of powering the car from 0 to 100 kilometres per hour in about 9.0 seconds.

South Korea’s top carmaker Hyundai Motor showed off its hydro fuel-cell Tucson SUV model which started production in February at its plant in the southern city of Ulsan.

The car, which generates electricity using hydrogen and oxygen from the air, can travel much longer distances than battery-powered vehicles.

“We have achieved the feat of commercial production of hydrogen fuel cell cars for the first time in the world, ahead of nations like Germany, Japan and the US,” Hyundai Motor CEO Kim Choong-Ho said.

Hyundai, which plans to sell 1,000 units globally by 2015, claims it is at least two years ahead of competitors like Honda or Toyota, who are developing their own hydro fuel-cell cars.

Although leading brands are developing electric models, the market for them still faces challenges, said one expert.

“Hybrid cars have firmly established themselves in the market, but electric cars still have a long, long way to go,” Kim Pil-Su, an auto expert at South Korea’s Daelim University, told a forum on the sidelines of the auto show.

A lack of infrastructure, including recharging stations, high prices and “misguided” marketing campaigns have resulted in the electric car industry losing its initial momentum, he said.

“To make electric cars more appealing to consumers it’s better to first market them as a second car for downtown driving or short-distance trips, instead of a car to entirely replace gas-fuelled cars,” Kim said.

The Seoul show is open to the public from March 29 through April 7.

Does the collapse of a US bakery chain mark the end of the cupcake era?

A new variation on Flower by Kenzo for spring