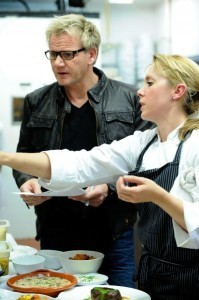 Gordon Ramsay has announced plans to open a casual dining eatery The Fat Cow in the retail complex The Grove, in Los Angeles. ©PRNewsFoto/Gordon Ramsay

(Relaxnews) – Celebrity chef Gordon Ramsay is adding a European-style, casual dining eatery to his ever expanding — and contracting — restaurant empire, the latest of which will open at the sprawling Los Angeles entertainment and retail complex, The Grove.

The house pastry chef will also offer a dessert menu filled with American classics, given a British flare.

The restaurant, set inside the sprawling 56,000 square-meter retail complex, joins other family-style eateries like The Cheesecake Factory and Maggiano’s Little Italy.

Ramsay is also slated to open his first Las Vegas outpost this summer, with Gordon Ramsay Steak at Paris Las Vegas casino, a modern steakhouse that will likewise have British influences.

Meanwhile, last month, less than a year after parachuting into Montreal, Canada and lending his star power to a local rotisserie chicken institution, owners of the Laurier Gordon Ramsay scrubbed off his name after complaining that the celebrity chef has been missing in action.

It’s not the first time Ramsay has run into trouble with his international outposts. In Australia, the Michelin-starred chef, perhaps best known for his explosive temper and expletive-laced diatribes on TV, left behind a financial mess after shuttering his two Melbourne restaurants Maze and Maze Grill, which reportedly owed $4.6 million to its local suppliers.

Jelly Bean is finally the most popular version of Android

Palace: No report yet of Filipinos hurt in Mecca crane accident