Christian Louboutin is expanding its beauty range with the launch of a new lipstick, inspired by the shoe designer’s love of all things lacquer. 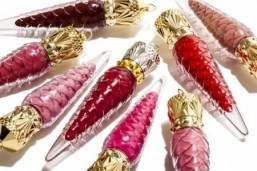 ‘Loubilaque’, which will debut this summer, promises high coverage, high shine, and high drama color in a bold antithesis of the current matte trend sweeping the makeup industry. Its high concentration of pigments is designed to offer a sleek, bold formula that is specially formulated to reflect light, combining intense color and shine, as opposed to the gloss achieved by liquid formulas.

The product will be available in eight different shades ranging from nudes to bright reds, including the brand’s signature Rouge Louboutin. Each lip lacquer is infused with a subtle scent.

The lipstick’s bottle, which can be worn as a vial around the neck, is designed with thick clear walls carved with a mermaid tail motif. The product is enclosed with a Turret-like crown reminiscent of the ornate aesthetics of Middle-Eastern antiquities and the Art Deco movement, and is topped by a metallic cap.

Louboutin, known for his blood red stilettoes, first broke into the beauty industry in 2014 with a nail polish collection, but cemented his influence on the market last September when he released a lipstick line that riffed on his iconic red shade. Loubilaque will join the brand’s existing Velvet Matte, Sheer Voile, and Silky Satin lip color finishes.

The designer has a long history with lacquer, basing his infamous red soles on a nail lacquer and often turning to high-shine patent leather finishes throughout his work.

Loubliaque will be in selected stores and on www.christianlouboutin.com from July 2016, priced at €80.

PH Authorities in Touch with FBI, DHS to Make Sure No Pinoy among Casualties in Boston Marathon Blasts