‘Glee’ reveals the first footage from its final season 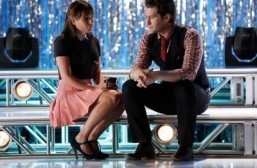 “Glee” returns to Fox on January 9 with the first two episodes of its final season.
©Tyler Golden/FOX

(Relaxnews) – Before returning to Fox in 2015 with its sixth and final season, the musical series has released a first look at one of its last performances, an interpretation of British songwriter Ed Sheeran’s “Sing.”

Performed by the Dalton Academy Warblers and their new coach Blaine (Darren Criss), the song is an excerpt from “Loser Like Me,” the first episode of the coming season. “Glee” fans will recognize Rachel (Lea Michele) watching the performance from the sidelines.

The show’s sixth cycle will premiere January 9 on Fox with two back-to-back episodes: “Loser Like Me” and “Homecoming.” All the original cast members will return to the high school in Lima, Ohio with hopes of resurrecting their vocal group, the New Directions. “Glee” will take its final bow on March 20, 2015 after 120 episodes and over 700 vocal performances.

Jared Leto in talks to replace Will Smith in ‘Brilliance’

Even Nadine Lustre feared being a ‘has been’ at one point