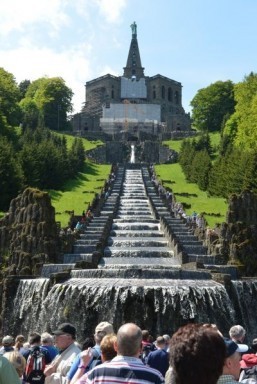 (KASSEL, Germany-AFP) – With its Hercules statue towering above a massive water cascade, romantic gardens and castle, Germany’s Bergpark Wilhelmshoehe has long been a marvel of baroque landscape design.

Locals are ecstatic that Europe’s largest hillside park, with its fairytale waterfalls, secluded ponds and hidden bridges, has made it onto the list of the world’s must-see cultural attractions and are readying for a tourist rush in the summer holidays.

The emblem of the nearby city of Kassel in central Hesse state, the leafy wonderland started life more than 300 years ago at the whim of Landgrave Carl at a time when local princes were outdoing each other in building ever more extravagant castles and parks.

The Bergpark Wilhelmshoehe is considered a jewel of the era of absolutism, a grandiose demonstration of man’s control over nature, and a marvel of aquatic engineering which goes on show every Wednesday and Sunday from May to October.

When the spectacle kicks off, 750,000 litres (200,000 gallons) of water tumble down the 350-metre (1,100 feet) long Grand Cascade, run through a complex system of channels, rapids and waterfalls and finally empty into a lake that is overlooked by a castle.

At its centre rises the geyser-like, 50-metre high Grand Fountain that, when it was built, was the tallest in the world.
“Unlike Versailles, this fountain doesn’t use any machine, the jet is created naturally by the water pressure,” enthuses Kassel’s parks and museums director Bernd Kuester.

The UN cultural body added Bergpark Wilhelmshoehe to its list of World Heritage sites on June 23, alongside the Sicilian volcano Mount Etna and Japan’s majestic Mount Fuji — a decision long awaited by the city, which had an immediate impact.

“We have received far more enquiries, and more people want to spend the night here to go and discover the Bergpark,” said Sonja Tobor at the tourist information office of Kassel, the city that also hosts the famous Documenta art show.

The Bergpark, which stretches across 550 hectares (1,350 acres), was started in 1689 and is the combined creative effort of Carl and his heirs, who added the lower park and built the Wilhelmshoehe Castle in the 18th century.

The aquatic theatre has been beloved by generations of German visitors, such as Mike Schroeter, who recently came with his child.

“This show is engraved in my memory, and I really wanted to come back to show my daughter,” said the 43-year-old father from Salzgitter, 130 kilometres (80 miles) away.

The UNESCO listing “is the crowning recognition” of the park’s merit, said a euphoric Bertram Hilgen, the mayor of Kassel.

The city is covered in posters celebrating the site’s new status, which Kassel hopes will put it firmly on the world map of man-made wonders.

The park is already popular with foreign tourists, particularly from Asia, and booked 800,000 visitors in 2012, a particularly good year when the city last hosted its Documenta art fair, held every five years.
Hilgen predicted annual attendance will rise by 10 percent thanks to the UNESCO accolade.

“Respect for the park has grown, the people’s perception has changed” said Kuester, adding with a smile that “it has become a kind of holy place”.

Tesla Model S gets a 2017 facelift