For good conversation, mobile devices should be neither seen nor heard: study 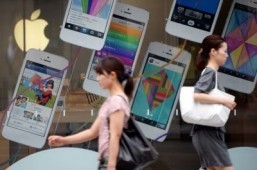 Social interactions during which mobile devices are present are less intimate and gratifying even if the device makes no noise.
©AFP PHOTO / TOSHIFUMI KITAMURA

(Relaxnews) – Researchers from Virginia Tech’s department of urban affairs and planning probed the question of whether the mere presence of a cell phone could affect the quality of in-person social interaction.

Viewed as a tool for accessing an expansive social network and a compendium of information, such a device can be a visual distraction, reducing the quality of face-to-face interaction even if it doesn’t beep, vibrate, flash or play popular tunes.

“Both non-verbal and verbal elements of in-person communication are important for a focused and fulfilling conversation,” says lead author Shalini Misra. “In the presence of a mobile device, there is less eye contact. A person is potentially more likely to miss subtle cues, facial expressions, and changes in the tone of their conversation partner’s voice when his or her thoughts are directed to other concerns.”

The study amassed a sample size of 100 two-person conversations concocted by Misra who assigned participants topics that varied in depth from casual to meaningful.

Trained research assistants discreetly observed the 10-minute conversations for the visual presence of a mobile device and to analyze the ensuing reactions.

Participants self-reported their conversations and reported sensing greater empathy for each other in the absence of mobile communication devices and tablets.

This was observed most abundantly in conversations between participants who had a close relationship with each other.

After further analyzing the findings, researchers concluded that interactions in which mobile devices remained hidden were of superior quality, regardless of the effects of age, gender, ethnicity or mood.

The study was published in the journal Environment and Behavior.

A Spooky Snack and Drink for Halloween