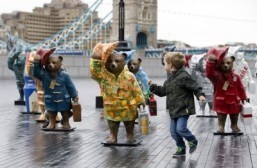 A boy runs between Paddington Bear statues, each with a different celebrity-designed paint job, displayed in front of Tower Bridge during a photo call ahead of the release of “The Paddington Trail” film in London on November 3.
©AFP PHOTO / JUSTIN TALLIS

(LONDON-AFP) – The movie “Paddington” has sparked a resurgence of interest in the bear from darkest Peru, with exhibitions, statues and a new book of his adventures coming out before the New Year.

Paddington Bear’s journey to the silver screen has been a long one, but Michael Bond’s much-loved children’s book character has been popular ever since he first appeared in 1958.

The impeccably polite stowaway turned up at London Paddington railway terminal with a battered suitcase containing a nearly-finished jar of marmalade, and a label on his blue duffel coat reading: “Please look after this bear. Thank you.”

The film premieres in Britain on November 28, but the Paddington Bear fest is already well under way.

The House of Illustration gallery in London got the ball rolling on October 18 with its “Paddington: Illustrated and Animated” exhibition on how artists through the decades have interpreted the diminutive bear.

“Paddington is one of the most enduring and recognisable characters in British children’s literature,” said Olivia Ahmad, the exhibition’s curator.

However, “the visual interpretations of Paddington have changed dramatically over the years”, she told AFP.

The inspiration for the character came on Christmas Eve 1956 when Bond, a writer and BBC cameraman, saw a lonely-looking teddy bear in a shop near his home close to Paddington station, and bought it for his wife.

A second exhibition, due to open at the Museum of London on November 14, traces Paddington’s history over the decades through objects drawn from private collections.

It includes the first edition of the first book, which is signed by Bond and belongs to his daughter Karen Jankel, original drawings and stuffed toys, and props from the “Paddington” film.

It also contains one of 50 statues of the bear which will be dotted out around London — each with a different celebrity-designed paint job.

The one at the museum was designed by the actor Benedict Cumberbatch.

The statues will start to appear around the city from Tuesday in places such as Heathrow Airport and Trafalgar Square, with bear-hunters able to follow a Paddington Trail map around London landmarks.

They will be auctioned for charity in December.

Bond has also designed his own statue of the bear.

At 88, the author is bringing out a new story, “Love from Paddington”, on December 23.

The book is in the form of letters written to Paddington’s aunt Lucy, back in Peru, telling her about his new life in London.

“Apart from being 86 minutes of good fun, I suppose if there are some delicate emotional themes underneath, it’s about an evacuee, a refugee coming to a foreign country and having been told certain things about that culture to expect,” the actor told AFP.

“Of course, the reality is very different.”

Paddington finds a home, but has a “spectacularly sticky journey to get there,” Bonneville added, involving a car chase through London, and a taxidermist on his tail played by Kidman.

“It’s a glorious journey to go on for a small bear from Peru,” or at least for a computer-generated version of him standing three feet, six inches (1.07 metres) tall.

And Bond himself has said he wants the trail to end when he passes away, telling The Times in an interview that he was taking legal action to prevent sequels after his death.

He said he would “hate” further works, adding: “I have just made a will and gone to a lawyer in the City who specialises in that very thing of stopping people doing it.”

He said the practice was “wrong”, adding that characters like Paddington Bear were “sacred”.

‘How I Met Your Mother’ spin-off in the works