Fans flock to Graceland in memory of Elvis Presley 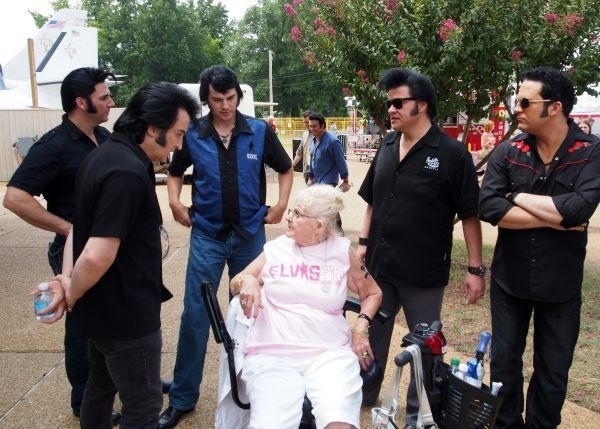 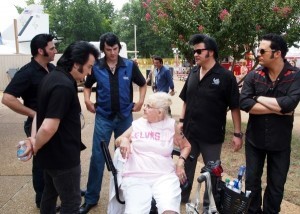 Elvis Presley tribute artists gather around Elvis fan Yvonne Robertson of Windsor, Ontario, Canada during Elvis Week at Graceland in Memphis, Tennessee on August 14, 2012. This year’s Elvis Week marks the 35th anniversary of the death of the King of Rock and Roll, and organizers expect it will be the largest ever.
©AFP Photo / ROBERT MacPHERSON

(MEMPHIS, Tennessee-AFP) – Fans of Elvis Presley are flocking to his Graceland estate for Thursday’s 35th anniversary of his death, and their enthusiasm for the king of rock ‘n’ roll is undiminished by the years.

Organizers of the annual Elvis Week expect this year’s edition to be the largest ever, with his widow Priscilla and daughter Lisa Marie Presley participating.

“Elvis is fan-driven,” said Joe Guercio, Presley’s musical director from 1970 until the star’s sudden death on August 16, 1977 at the age of 42, “and there are not a lot of people (in show business) who are fan-driven.”

Actually nine days long, Elvis Week started in Memphis last Friday, centered around a 1,200-seat air conditioned tent across Elvis Presley Boulevard from Graceland and next to the preserved remains of the singer’s private jet.

Highlights include an all-night candlelight vigil Wednesday at Graceland’s gates, where fans this year will have the option of lighting real wax candles or switching on virtual candles on a special Elvis Week smartphone app.

On Thursday, a concert at a downtown stadium — featuring Priscilla and Lisa Marie, as well as surviving members of Presley’s band — will review the legend’s roots in blues, gospel and country music.

Folded into Elvis Week is the sixth annual Ultimate Elvis Tribute Artist Contest — never, ever call them impersonators — with contestants from as far afield as Australia and Japan.

“I always look like this, minus some of the make up — but the hair is always the same, sideburns and everything,” immaculately coifed Rick Huntress, an award-winning Elvis tribute artist from New England, said.

Tuesday saw hundreds of Elvis fan club presidents get the lowdown from Elvis Presley Enterprises, which closely oversees the rights to Presley’s posthumous image, on his enduring legacy in film, commercials and merchandising.

Much more of a crowd-pleaser — it was greeted with cheers — was a Canadian-made suitcase emblazoned with an airbrushed portrait of Presley. “It’s really nice,” said Butler, who listed its price at $100.

And in a cross-cultural fusion of pop culture icons, Butler lifted the wraps off a forthcoming Elvis version of Japan’s Hello Kitty doll. “We just love it,” she said. “She’s just cute in her little Elvis duds.”

In another part of Memphis, Presley artifacts went under an auctioneer’s hammer, including — of all things — an empty plastic bottle of tetracycline, an antibiotic, prescribed to Presley in 1974. It sold for $5,500.

A pair of yellow-tinted sunglasses, custom-made in Germany for the singer, sold for $22,500 while a gold Longines watch — a gift from his manager Colonel Tom Parker — realized $16,250, Heritage Auctions said.

It had been hand-made for a gig that Presley gave near Memphis just a few months after he released his first hit single “That’s All Right.”

Other memorabilia that did sell included a Colt Python double-action revolver that Presley used for target practice in the backyard of Graceland. It went for $13,750.

Look to the stars: the top five tips for conquering Twitter