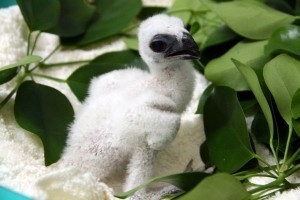 A newly-hatched Philippine hawk-eagle stands next to tree leaves prior to feeding time at the Philippine Eagle Foundation (PEF) center in Davao city, in southern island of Mindanao on April 19, 2012. ©AFP PHOTO

(MANILA-AFP) – A Philippine hawk-eagle feared to be heading for extinction has been bred in captivity for the first time, its breeders said Thursday.

Hand-fed with ground quail meat, the chick has swiftly bulked up to 157 grams (0.04 ounces), three times its weight when hatched in an artificial incubator 16 days ago, thePhilippine Eagle Foundation said.

Its spokeswoman Anna Mae Sumaya said this marked the first success of an 11-year-old captive breeding programme for the Nisaetus philippensis that dwell in fast-disappearing lowland forests.

“The species is under threat from human persecution. All the Philippine hawk-eagles that had been turned over to us were either injured by hunters or were young birds that had been removed from their nests,” she told AFP.

The adult of the dark-brown bird is 64-69 centimetres (25.2-27.2 inches) long, with a long crest of four or five feathers protruding from its crown.

Preying on lowland forest animals, the unique raptor is one of nearly 200 bird species that are found only in the Philippines.

Swiss-based International Union for the Conservation of Nature (IUCN) says it is “vulnerable” from hunting and habitat loss.

The foundation had been trying to breed Philippine hawk-eagles since 2001, using adults rescued from hunters that were rehabilitated at its project site in the southern city of Davao.

“We got our first compatible pair in 2009 and they laid eggs in 2010 and 2011, but they always got crushed before we could collect them,” Sumaya said.

The hatchling was from the “pinskeri” subspecies, a Philippine hawk-eagle variant that is found on the southern island of Mindanao, she said.

Set up in 1987 for captive breeding of the critically endangered Philippine eagle, one of the world’s largest birds of prey, the non-profit foundation later also began breeding other raptors found only in the Philippines.

“They are all threatened, they have almost the same habitats and inhabit more or less the same territory as the Philippine eagle,” Sumaya said.

The foundation has artificially bred 24 Philippine eagles from captive pairs and released three young birds back in the wild, though only one of those released birds is still alive.

Versace gets real for Real Madrid