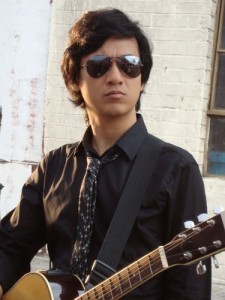 MANILA, Dec 4 (Mabuhay) — What started as an idea for a music video for Pupil’s “Pusakal” has snowballed to become the first feature film venture of the band’s frontman Ely Buendia.

The initial concept for “Pusakal” was inspired by Pupil’s popular “20/20” music video, which was shot along EDSA, Buendia said during a press conference for his contract-signing with the film’s producer Curve Entertainment.

“So ang nangyari, lumaki na lang nang lumaki. Nagkaroon kami ng script, nagkaroon kami ng story. From there, it snowballed na lang. After the intial scriptwriting stage in May, we shot the movie, and right now, we’re finishing it up, post-production,” the musician said.

According to Buendia, the film tackles the culture of violence in the Philippines and unfolds as an anthology of three “segments.” The former Eraserheads vocalist will direct one that features actress Megan Young; while Pupil guitarist Yani Yuzon and music video director King Palisoc will direct the other two.

Other actors featured in the movie are Art Acuña, Joel Torre, Bela Padilla and Buendia himself.

Comparing “acting” in a music video and for a feature film, Buendia said, “I don’t consider music video performance acting kasi tumutugtog ka lang naman. Sometimes you have to show some emotion, pero this one’s different.”

Having released his first short film in 2008, the OPM icon credits digital technology for making it easier to become a filmmaker. In the ’90s, Buendia pointed out, this wasn’t the case — as the equipment for making films were limited even at institutions that offered education on the craft.

“I really wanted to be a filmmaker since college, as a career. Music for me was just a hobby then; I didn’t really think making I’d make an actual career out of it. I was studying to be in film,” he said.

“After 20 to 30 years and with the advent of digital technology, mas madili nang pumasok sa filmmaking,” Buendia added. (MNS)