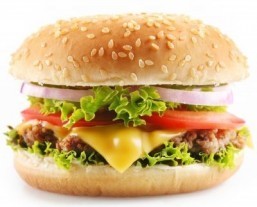 Research says stress is not a good reason to treat onself to a burger: in fact, consuming high fat foods is more likely to lead to weight gain in times of stress.
©Valentyn Volkov/shutterstock.com

(Relaxnews) – New research disputes popular belief that stress speeds up the metabolism, suggesting that bumps in the road are when it’s most important to stick to a healthy diet that’s low in fat.

Researchers at Ohio State University served a 930-calorie meal containing over 60 grams of fat to an all-female group of participants, then measured their metabolic rate and took measures of blood sugar, triglycerides, insulin and the stress hormone cortisol.

The 58 women, whose average age was 53, were also questioned about the previous day’s stresses and those who had experienced at least one stressful event burned 104 fewer calories than their stress-free counterparts.

According to researchers, such a difference in metabolic rate could contribute to a weight gain of up to 11 pounds per year.

Another indicator of weight gain in the stressed women was higher insulin levels, for insulin contributes to the storage of fat.

“This means that, over time, stressors could lead to weight gain,” said Jan Kiecolt-Glaser, professor of psychiatry and psychology at The Ohio State University and lead author of the study. “We know from other data that we’re more likely to eat the wrong foods when we’re stressed, and our data say that when we eat the wrong foods, weight gain becomes more likely because we are burning fewer calories.”

Although plenty of research has associated stress with becoming overweight or obese, the authors say their study points to an actual pathway.

Kiecolt-Glaser remarked that the meal of turkey sausage, eggs, biscuits and gravy — which he required subjects to consume in 20 minutes or less — is not unlike what individuals tend to consume on-the-go.

To further whittle down their findings, researchers divided participants into two groups and gave each a different kind of high-fat meal.

“We suspected that the saturated fat would have a worse impact on metabolism in women, but in our findings, both high-fat meals consistently showed the same results in terms of how stressors could affect their energy expenditure,” says Martha Belury, professor of human nutrition at Ohio State and a co-author of the study.

Those experiencing both stress and depression saw sharp rises in the fat content in the blood, which is measured by the amount of triglycerides present.

While researchers are not ready to apply their findings to men because of differences in body fat storage and hormones, they do hope their research will encourage everyone to keep healthy food on hand during periods of stress.

“We know we can’t always avoid stressors in our life, but one thing we can do to prepare for that is to have healthy food choices in our refrigerators and cabinets so that when those stressors come up, we can reach for something healthy rather than going to a very convenient but high-fat choice,” Belury said.

The study was published in the journal Biological Psychiatry.

No sand, no beach: Snow volleyball takes Alps by storm