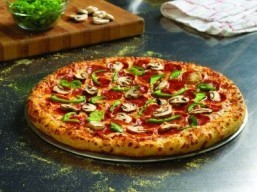 Domino’s, one of the biggest pizza delivery chains in the world, opened its first store in Milan Monday, hoping to do what no other American pizza brand has done before and find success in Italy.

It’s a ballsy move, but one the chain bets will work based on filling a void in local market: fast online pizza orders, with customizable toppings, and delivery at competitive prices, says Alessandro Lazzaroni, 36, the entrepreneur heading the franchise.

Recipes will cater to local palates and pizzas will be made with locally-sourced ingredients such as wheat, tomato sauces, cheeses and Prosciutto di Parma. The menu will feature classic standbys favored by Italians such as Margherita, Napoli and Sicilian pizzas.

Italians are said to eat pizza an average of seven times per month.

The move will likely be watched closely by coffee giant Starbucks, which has steered clear of setting up shop in Italy given the country’s fierce coffee culture and resistance to the distinctly American brand.

Trafficked Filipino teachers urged to step out of the shadows