Do women talk more than men? It depends on the situation: study 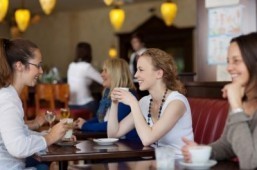 Researchers worked with men and women in two different social settings. In the first, conversation was freely allowed during a 12-hour collaborative academic work period, while the second circumstance observed workers’ interactions on their hour-long lunch breaks.

A total of 38 women participated in the lunch break setting, while only 16 male participants were present.

Despite their high representation, women were only slightly more likely to converse in the lunch break setting, but they were much more likely to talk during the academic task, particularly for long conversations.

This conclusion, however, was limited to small groups, for researchers noted that as the group size swelled to six or more, the men did most of the talking.

“In the one setting that is more collaborative we see the women choosing to work together, and when you work together you tend to talk more,” said David Lazer, co-director of the NULab for Texts, Maps, and Networks, Northeastern’s research center for digital humanities and computer social science. “So it’s a very particular scenario that leads to more interactions. The real story here is there’s an interplay between the setting and gender which created this difference.”

Lazer and his team attribute the accuracy of their findings to the wearable social tracking devices worn by participants.

Roughly the size of an iPhone, the sociometer is used in the scientific community to develop conceptual models of group interactions, according to research.

It is named after a concept developed in 1995 by Duke University psychology professor Mark Leary.

Leary’s theory suggests that self-esteem is a measure of interpersonal relationships and their quality, hence the name sociometer.

Lazer’s study was published in the journal Scientific Reports.