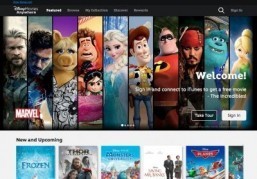 (NEW YORK-AFP) – The Walt Disney Co. announced Tuesday the launch of a service allowing users of iPads and iPhones to access hundreds of movies via the Internet cloud.

“Disney Movies Anywhere” is being offering as an app for Apple devices which “enables consumers to discover, purchase, manage, and watch movies from Disney, Pixar, and Marvel at home and on the go.”

“Disney Movies Anywhere offers an exceptional consumer experience built around some of the most beloved and popular entertainment brands in the world,” said Alan Bergman, president of Walt Disney Studios.

“This unique technology underscores Disney’s commitment to meeting our consumers where they are with the content they want, and we’re thrilled to debut with iTunes, the number one digital media retailer in the world.”

Users will be able to link their iTunes account to Disney Movies Anywhere to create a “digital movie locker” of streaming films stored in the cloud.

It will also be offered for desktop and laptop computers.

Consumers who have purchased Disney films released since 2008 will be able to use the codes on those titles to watch on their tablets, phones or computers, the company said in a statement.