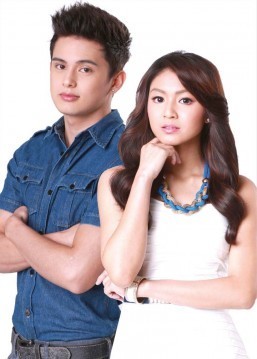 James Reid and Nadine Lustre are the newest members of the Kapamilya network, after they signed a contract with ABS-CBN recently.

It was a sweet homecoming for the Filipino-Australian Reid, who started his career when he joined “Pinoy Big Brother: Teen Clash Edition” in 2010.

For her part, Lustre said: “It feels good to be part of a new family.”

The stars of the hit movie “Diary ng Panget” and “Talk Back And You’re Dead” confirmed that they will be doing several projects with ABS-CBN, including a TV series, as well as albums.

Lustre admitted that she still can’t believe that she is now part of the Kapamilya network.

No issue with ‘KathNiel’

In the interview, Lustre and Reid stressed that they are not competing with the love team of Kathryn Bernardo and Daniel Padilla.

Lustre reiterated that she has no problem being compared with Bernardo, amid comments that they look alike.

“It’s fun. For me it’s not really an issue naman. I’m really okay with it and I’m flattered. I guess it’s really just the people talaga. Kasi we are in showbiz, they compare you with other artists so I guess it’s normal,” explained Lustre, who she’s also a fan of Bernardo.

“It’s natural to compare but it’s good for us being upcoming stars. They are the biggest love team, KathNiel,” Reid added.

Now that they belong to the same network, Lustre and Reid believes that the rift between their fans and the supporters of Padilla and Bernardo will end soon.

“Fans will learn to love us all,” Reid said. (MNS)