David Fincher and Rooney Mara could reteam for ‘Red Sparrow’ 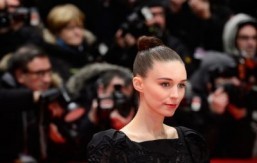 (Relaxnews) – Two years after “The Girl with the Dragon Tattoo,” the director and the actress could soon reunite for another collaboration, Deadline.com indicates. After adapting the book by Swedish crime novelist Stieg Larsson, David Fincher is circling an adaptation of a spy novel by Jason Matthews.

Published in June 2013, “Red Sparrow” focuses on a Russian spy, Dominika Egorova, who is tasked with seducing and neutralizing a CIA agent. But Dominika eventually turns on her bosses and heads down a dangerous path as a double agent working for the American government.

The adaptation is still in an early phase, as producers are currently in talks with “American Hustle” screenwriter Eric Warren Singer to turn the novel into a screenplay.

Rooney Mara is reportedly circling the lead role, while David Fincher is eyeing the director’s chair.

In summer 2013, fresh off the set of “Noah,” Darren Aronofsky had also expressed interest in directing the adaptation, although apparently a deal was not reached.

No wedding bells yet for Tommy, Miho