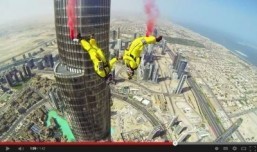 Screenshot: French duo Vince Reffet and Fred Fugen perform a record-breaking BASE jumping from above the pinnacle of the world’s tallest building.
©SkyDive Dubai/YouTube

(Relaxnews) – If you suffer from vertigo, you may want to peek through your fingers for this one: a pair of French daredevils have broken the record for the highest BASE jump after leaping from the tip of the tallest building in the world, the Burj Khalifa in Dubai.

The heart-stopping stunt is captured on video (of course) and has already attracted more than a million hits since being uploaded April 22.

Despite falling from a height of 828 m (2,717 feet) at head-spinning speeds, duo Vince Reffet and Fred Fugen engage in a carefully choreographed jump that involves clasping hands mid-fall and entering a controlled spin for the benefit of cameras.

To break the previous Guinness World Record held by Nasser Al Neyadi and Omar Alhegelan, who jumped off the same tower in 2010, the French pair added an extra 500 feet (152 meters) by building a special platform at the tip of the Burj Khalifa.

The stunt was the culmination of years’ worth of training and preparation.

Watch the video at http://bit.ly/1ieWOM9.

Portman to star as Jackie Kennedy in new film: Variety