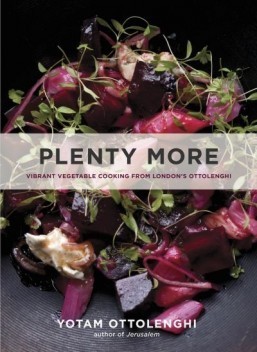 (Relaxnews) – London celebrity chef Yotam Ottolenghi is about to release a sequel to his award-winning vegetarian cookbook with “Plenty More.”

After “Jerusalem: A Cookbook,” which paid homage to the culinary diversity of Jerusalem’s cuisine, and “Plenty,” published in 2011, Ottolenghi is focusing once again on the humble vegetable kingdom in his latest cookbook.

Over 352 pages, readers will learn how to make dishes like globe artichoke and mozzarella with candied lemon, and roasted figs with pomegranate molasses and orange zest.

The book features 150 recipes which are organized by cooking method — grilling, roasting, steaming, braising — and focuses on spices, seasonality and bold flavors.

Ottolenghi is best known among Londoners, where he owns a handful of restaurants and delis that serve platters groaning with colorful, fresh salads and mains like pork chop with apricot mustard and roast pork belly, prawns and chilli sambal.

His last book, “Jerusalem: A Cookbook,” was named Cookbook of the Year by the International Association of Culinary Professionals and Best International Cookbook by the James Beard Foundation.

“Plenty More” is published by Ten Speed Press and will be released October 14 in the US.

Thousands set for S. Korea’s ‘battle of the singles’

May Day march for immigration reform in L.A.

Aquino ‘shocked’ by the passing of esteemed Inquirer editor-in-chief