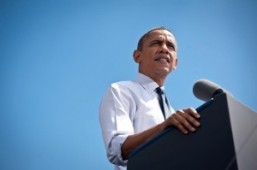 Washington, United States (AFP)  – US President Barack Obama warned in a speech on Wednesday that the threat from global warming poses a national risk rivaling that of terrorism, and should be seen as a top security priority.

In a commencement address for new graduates of the US Coast Guard Academy, Obama declared that “confronting climate change is now a key pillar of American global leadership” which should top the national agenda beyond his administration.

“Even as we meet threats like terrorism, we cannot, and we must not, ignore a peril that can affect generations,” the president said in the address in New London, Connecticut.

“Our military leaders, generals and admirals, active duty and retired know it’s happening. Our homeland security professionals know it is happening, and our Coast Guard knows it’s happening,” he said.

Obama took aim at political opponents in Washington “who refuse to admit that climate change is real,” saying that the science against them is “indisputable.”

“The levels of carbon dioxide in the atmosphere are now higher than they have been in 800,000 years,” the president said.

“Fourteen of the 15 hottest years on record have been in the past 15 years. Last year was the planet’s warmest year ever recorded,” he said.

“The world’s glaciers are melting, pouring new water into the ocean. Over the past century, the world sea level rose by about eight inches,” he said.

“That was in the last century. By the end of this century, it’s predicted to rise another one to four feet,” he said, adding that this newest corps of Coast Guard cadets is likely to be directly affected – in terms of how they train and the tasks they are asked to carry out – by the rise in ocean levels.

Obama warned that a one-foot rise in sea levels could cost the United States as much as $200 billion.

The Pentagon is taking the matter so seriously that according to White House officials, it is assessing the vulnerability of more than 7,000 bases, installations and other facilities to climate change.

The military is also studying the impact of the National Guard being deployed to deal with the aftermath of extreme weather.

In the final stretch of his presidency, Obama increasingly is sounding an alarm about environmental themes, taking advantage of speeches and public events to issue fresh warning on the subject.

In a speech in Florida last month, he highlighted the economic benefits of protecting the environment on local businesses and industry, hoping to undercut arguments that carbon reductions result in hampered growth.

It is the beginning of a White House drumbeat that administration officials say will extend through a summer of environmental rule-making to a major climate change summit in Paris at year’s end.