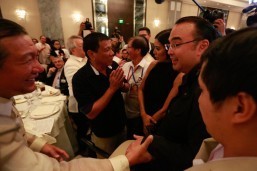 Presidential candidate Davao Mayor Rodrigo Duterte and running mate Sen. Alan Peter Cayetano arrive at the Makati Business Club forum on Wednesday. Duterte talked about his plans on how to fight crime and corruption, and said he is not the man he is portrayed to be by some.(MNS photo)

MANILA  (Mabuhay) – The heads of the Commission on Human Rights (CHR) and the House of Representatives on Thursday lashed back at Davao City Mayor Rodrigo Duterte over his remark that investigating bodies should not subject the police and the military to “humiliating” probes.

“Mayor Duterte anchors his bravado and demagogic statements on his view of people’s ignorance of the law which he continues to twist for self-serving ends,” CHR chair Loretta Rosales said.

In a speech before the Makati Business Club on Wednesday, Duterte said law enforcement agencies such as the police and the military might be stymied in performing their functions of running after criminals due to supposed humiliating inquiries by congressional committees, the Office of the Ombudsman and the CHR.

He added that if elected president, he would order law enforcement agencies to go after criminals, even shoot to kill them if they fight back, in line with his promise to suppress criminality in three to six months.

Rosales said investigating bodies such as Congress, the Ombudsman and the CHR are mandated under the Constitution to probe any possible erring law enforcer.

“When law enforcers break the law, they are investigated (not humiliated) by these bodies. Without solid and substantial evidence, the law enforcers are cleared. But if evidence is strong through trial, the COURT convicts them,” Rosales said.

“This is the due process which Duterte must respect. But Duterte ignores due process and behaves like a narcissistic and egoistic individual, apparently to gain the loyalty of the Armed Forces and Police personnel. This really makes him dangerous,” she added.

House Speaker Feliciano Belmonte, for his part, shared the same view, pointing out that preventing Congress from performing its investigative functions is a violation of the Constitution.

“Well these are bodies provided in the Constitution with their specific functions. If he prevents them from exercising their functions, does he imply he can ignore the Constitution?” Belmonte said.(MNS)

Flyers in US most satisfied with JetBlue and Southwest: poll