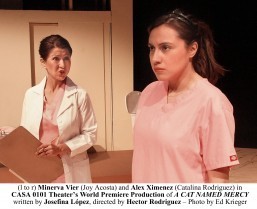 The world premiere theater presentation of “A Cat Named Mercy,” currently showing until February 23, 2014 at Casa 0101 Theatre in Boyle Heights stars Cebu-born, Minerva Benedicto Vier.The play, written by Josefina Lopez and directed by Hector Rodriguez is about maximizing a person’s life, understanding their healthcare issues, as well as their end of life right to a peaceful death.

Minerva Vier is not only an actor but a playwright, dancer, singer and voice-over artist. She has a BFA degree from Loyola Marymount University and an MFA in Theater Arts at the Actor’s Studio of The New School University in New York. She has performed in various LA stage productions for theater companies such as: Center Theater Group, East West Players, Playwright’s Arena, Latino Theater,Company, Antaeus Classical Theate, Collage Dance Theatre, Teada, Casa 0101 and many other theater venues

As the character of Joy Acosta, the head nurse in the play, Minerva is grateful to be included in “A Cat Named Mercy.”
Other actors starring in the play are: Alex Ximenez in the lead role as Catalina Rodriguez,  Blanca Araceli, Michael Cota, Rebecca Davis, Alex Denny, Maricela Guardado, Henry Madrid, Carmelita Maldonado, Maria G. Martinez, Bill Reyes, Marquel Skinner, and Beatriz Eugenia Vasquez as the “Mercy Cat.”

If you’re a theatre enthusiast, don’t miss to catch their performance at Casa 0101 by calling: 323/263-7684.for
showtime information. The play is worth watching as it subliminally touches on current issues such as immigration, healthcare and assisted living.

Solon proposes to use ABS-CBN frequencies for distance learning 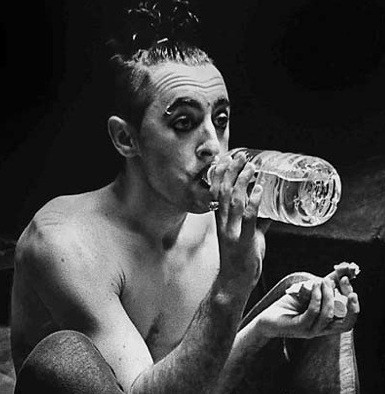