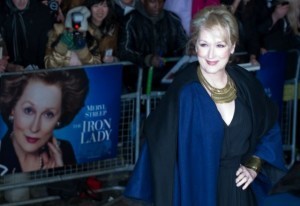 Mery Streep is among stars due in Berlin to present new films at the first major European festival of the year. ©AFP PHOTO / LEON NEAL

(BERLIN-AFP) – The Arab Spring uprisings and political turmoil in the West will dominate the 62nd Berlin film festival starting Thursday, as Hollywood royalty sprinkles stardust in the frigid German capital.

Angelina Jolie, Meryl Streep, Uma Thurman, Robert Pattinson, Antonio Banderas and Christian Bale are due in town to present new films at the first major European festival of the year, and arguably its most topical.

“Farewell My Queen”, a drama starring Diane Kruger as Marie Antoinette on the eve of the French Revolution and told from the point of view of the underclass — a kind of “Occupy Versailles” — will set the tone for 11 days of world premieres.

“There is a clear theme running through the Berlinale this year and that is upheaval,” festival director Dieter Kosslick told reporters as he unveiled the line-up featuring nearly 400 films.

“A lot of stories are seen from the perspective of the underdog and that theme of radical change and political awakening applies to our opening film too.”

“Farewell My Queen” by French director Benoit Jacquot is one of 18 pictures vying for the Golden Bear top prize, to be awarded by a jury led by British director Mike Leigh and including US actor Jake Gyllenhaal, Franco-British actress Charlotte Gainsbourg, Dutch photographer Anton Corbijn and French director Francois Ozon.

Also on the panel is Iran’s Asghar Farhadi, who took home the Golden Bear and swept the acting prizes last year for his wrenching drama “A Separation”, setting the film on a trajectory that has now seen it nominated for a foreign-language Oscar.

Berlin prides itself on being “edgier” than its chief competitors, Cannes and Venice, with a more overtly political programme.

This year’s event will spotlight the Arab Spring one year after the fall of Egypt’s Hosni Mubarak with documentaries shot on the ground, panel discussions and feature films dealing with the region’s history and cultures.

And three films in the festival’s Forum section will spotlight the nuclear disaster at Fukushima last March, including “No Man’s Zone” which takes viewers into the contaminated area around the stricken reactors.

Jolie is to present her directorial debut “In the Land of Blood and Honey”, a Bosnian wartime love story, and participate in an audience discussion after the screening.

Streep will pick up an honorary Golden Bear for her life’s work and the festival will show the top films of her career culminating in a gala screening of her new Margaret Thatcher biopic “The Iron Lady”.

In the competition, 2007 Golden Bear winner Wang Quan’an will unveil his sweeping Chinese epic, “White Deer Plain”, based on “one of the most controversial novels in modern Chinese literature,” Kosslick said.

Chen Zhongshi’s prize-winning bestseller depicts the hardscrabble lives of generations of families in the countryside before the rise of communism.

US actor and film-maker Billy Bob Thornton, who won a screenwriting Oscar for his own first outing as a feature film director, 1996’s “Sling Blade”, will premiere the Vietnam War-era drama “Jayne Mansfield’s Car” in the competition.

Other entries in the main showcase include British drama “Bel Ami”, based on a Guy de Maupassant novel and starring Pattinson of “Twilight” fame as a young man who manipulates Paris’s wealthiest women to realise his ambitions.

Thurman, Kristin Scott Thomas and Christina Ricci co-star in the picture, which will appear out of competition.

Bale will also appear out of competition in “The Flowers of War” by Chinese master Zhang Yimou.

And Shah Rukh Khan will delight Bollywood fans at a screening of the German-India co-production “Don – The King is Back”.