Belgian chocolate stamp has it licked 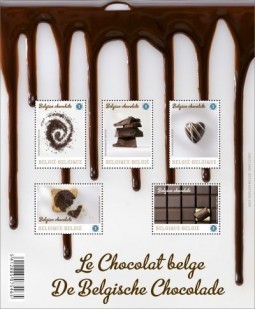 A handout photo provided by the Belgian postal service Bpost on February 6, 2013 in Mechelen shows a sheet from a collection of new stamps tasting and smelling like chocolate. Bpost said it added a chocolate taste to the glue of the stamps.
©AFP PHOTO / BPOST

(BRUSSELS-AFP) – Belgium has launched a new stamp sure to delight chocoholics around the world.

“We have added a chocolate taste to the glue of the stamps… which you can taste when you lick it,” the Belgian postal service said.

“The stamps are also imbued with the smell,” it said, while the design side carries pictures of chocolate in various forms.

“It was not easy to get the scent and flavour of the dark chocolate right. In the end, people from Belgium, Germany, the Netherlands and Switzerland all worked on it,” it said.

“It is not the first scented stamp … but this time it has been combined with a flavour.”

The series of five stamps, intended for overseas mail, will cost 6.20 euros when they go on sale March 25.