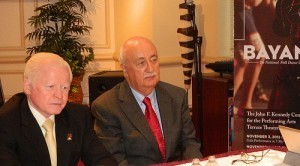 Ambassador Jose L. Cuisia, Jr. and Ambassador John Maisto, President of the US-Philippines Society, announce the upcoming performances of the Bayanihan before members of the press and leaders of Filipino-American associations during a briefing held at the Philippine Embassy on 15 October 2012. The Bayanihan National Folk Dance Company will be performing at the Lincoln Center in New York on 1 November 2012 and at the Kennedy Center for the Performing Arts in Washington, D.C. on 3 and 4 November 2012

US beverage giants vow to cut calories to fight obesity