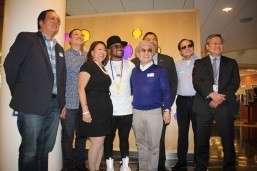 Apl. de ap poses with well-wishers that included officers of Apl. de ap Foundation, namely Ted Benito (first from left), Susan Delen (third from left) and Fritz Friedman (standing beside him). On the far right is Dr. Thomas Lee, Vision Center division chief of Children’s Hospital of Los Angeles. The photo was taken shortly after the unveiling of the rapper’s spotlight at the CHLA’s celebrity donor wall. Photo: Odette Galino

POPULAR rapper Apl. deap has earned a “spotlight” at the Children’s Hospital of Los Angeles (CHLA) celebrity charity wall for leading a campaign against blindness among children in the Philippines.

Apl. deap, whose real name is Allan Pineda Lindo, came to the CHLA at Sunset Boulevard, Los Angeles on Thursday and took part in the unveiling of his “spotlight.” He is the first Filipino American to be featured in the said donor wall reserved for celebrities, artists and sports figures who have helped the CHLA or its programs in big ways.

In unveiling the spotlight, Lee told the rapper that he was “honored to be part of your (Apl. deap’s) life, and in what you do and how we can help each other realize a better world for children all over the world.”

Apl. deap thanked Lee and the CHLA for featuring him in the celebrity charity wall, adding that he is honored  to be a part of an ongoing mission to fight blindness among Filipino children.

“ It is very close to my heart, being legally blind myself. And I also know the difficulties of growing in Philippines. And I feel that is only the beginning of a beautiful partnership and I think that we can do more together,” Apl. deap said.

Last year, the Apl.deap Foundation, the CHLA and the Philippine Academy of Ophthalmology made a big stride on their mission of diagnosing and curing pediatric eye affliction in the Philippines by bringing in a retinal imaging system, better known as the “Retcam.”

Sonia Delen, a prominent philantropist and chair of Campaign for Filipino Children of the Apl. deap Foundation International, disclosed that there were only four Retcams in the country before they donated another one to a hospital in Davao, which brought the total of such medical equipments to five.

Delen added that there are about 34 Retcams in the state of California alone, noting that 5 Retcams for 120 million Filipinos are simply not enough.

Since the Retcam became operational there were already 30 children who were diagnosed and treated in Davao.

Delen also thanked Dr. Lee for guiding and teaching at least 60 Filipino ophthalmologist “to make sure that they know how to use the equipment (Retcam) and that can properly diagnose eye afflictions in premature babies and prevent them from going blind.”

For his part, Dr. Lee explained that the mission would be particularly beneficial to prematurely born babies who are in danger of going blind if not diagnosed and treated during the early months of their lives.

Lee said the program allowed CHLA doctors to work with their counterparts, not only in Manila but as well as in provinces, and to take advantage of all available gadgets such cellphones in remotely guiding those conducting procedures in the intensive care unit.

The CHLA eye expert added that they feel fortunate that they are able to help children in the Philippines, adding that CHLA’s mission is not only confined to Los Angeles but tochildren all over the world.

The Apl. deap Foundation is set to bring in two more Retcams to the Philippines, specifically to Iloilo and Pampanga, this year.

‘Take your clothes off, be like me!’ says wise-cracking robot