‘Ant-Man,’ a super-hero who doesn’t take himself seriously 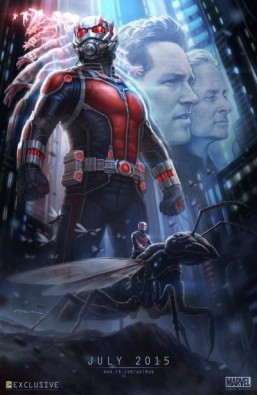 ‘Ant-Man’ has been a hit with critics in the US even before its release.
©Marvel

And that’s a good thing, with a name like Ant-Man. “This is a guy flying on the back of an ant, this is not the Winter Soldier,” laughed Paul Rudd, referring to the arch-foe of Captain America.

“Marvel is well aware of that. You can have fun with all that… and still tell an emotional story,” added the 46-year-old, who had to live on an almond a day to get into six-pack shape for the role.

The movie, released in the United States on Friday, could catapult the actor and co-screenwriter into the Hollywood megastar galaxy.

Known until now for family comedies with Judd Apatow like 2007’s “Knocked Up” and “This is 40” (2012), Rudd could follow in the footsteps of fellow “Parks and Recreation” TV star Chris Pratt.

Pratt made his blockbuster debut in last year’s “Guardians of the Galaxy,” before starring in this year’s record-breaking “Jurassic World.”

Playing a superhero has become a Holy Grail needed to enter the club of global Hollywood megastars, because the films are distributed — and lapped up — around the world.

Actors known for more serious dramatic roles like Mark Ruffalo and Edward Norton (who have both played Marvel’s The Hulk) have taken the path, while “Iron Man” helped to revive Robert Downey Jr’s career.

Moreover, “Ant-Man” has been a hit with critics in the US even before its release.

“The Marvel cinematic universe can be an awfully big, noisy and repetitive place to spend your time and money,” said the Variety trade magazine.

“But at its best, it can also allow for humor, whimsy and lightness of spirit — all qualities that come into play in ‘Ant-Man.'”

The movie tells the story of Hank Pym (played by Michael Douglas), a science guru who discovers a chemical substance that can shrink someone while increasing their strength.

“Ant-Man” can also use his mental power to control armies of ants.

But his former gifted student Darren Cross (Corey Stoll of “House of Cards” fame) manages to replicate his invention and wants to sell it to ruthless arms dealers.

So the ageing Pym chooses Scott Lang, a low-level thief just out of prison and trying to organize visiting rights with his daughter, to become Ant-Man and save the planet.

The film has visual fun with dimensions, as Lang shrinks from human size to infinitely small, passing by microscopic.

Rudd, who said he was only a modest fan of superhero comics when he was a child, said he understands why the larger-than-life characters fascinate filmgoers, especially “tortured” ones like The Hulk.

“When you go back to the comics, smart people wrote these and lots of bright people get into them. And kids can be into them too,” he told reporters ahead of the film’s release.

The actor’s next role sees him in another black and red costume in “Captain America: Civil War,” due out next year. And Rudd says he hopes to stay in the Marvel universe for some time to come.

Teaser for ‘The Face of an Angel,’ inspired by Amanda Knox case