AFP ready to defend military exercises with Japan before SC 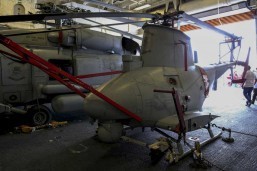 A VTOL Tactical Unmanned Aerial Vehicle (VTUAV) is shown to the members of media during a tour on a USS Forth Worth (LCS 3) docked at the harbor in Puerto Princesa, Palawan on Monday. The Philippines is holding naval exercises with U.S. and Japanese forces this week not far from the disputed Spratly Islands. (MNS photo)

MANILA (Mabuhay) — The Armed Forces of the Philippines (AFP) on Wednesday said it is ready to defend the legality of its joint military exercises with Japan before the Supreme Court (SC).

“From the perspective of the Armed Forces and the Philippine Navy, we believe that the exercises were conducted with firm basis on our existing policies and laws,” Col. Restituto Padilla, Jr., spokesperson of the AFP, said.

The SC on Tuesday ordered the AFP and Malacañang to respond to the petition filed by a group led by ACT Teachers party-list Rep. Antonio Tinio. The petitioners asked the high court to declare as unconstitutional a memorandum on defense cooperation, and a joint declaration providing for the joint military exercises between the two countries.

“The Armed Forces is actually appreciative of these kinds of measures to clarify certain activities we conduct with other countries,” Padilla said, adding the AFP is closely working with the Department of National Defense (DND) to argue the legality of the military exercises before the court.

Padilla also maintained that the exercises were conducted in international waters contrary to the claim of the petitioners that two military exercises were held in the Philippines since the signing of a memorandum for the partnership.

According to the petitioners, maritime exercises were held off the coast of Corregidor Island last May 12, and joint exercises at the Antonio Bautista Airbase in Palawan from June 22 to 24, 2015.

“The conduct of the exercises were actually done in agreed areas that are international waters,” Padilla said.

5 habits to adopt before, during and after skiing from ski champion Marion Rolland

Does a healthy heart start with a healthy marriage?