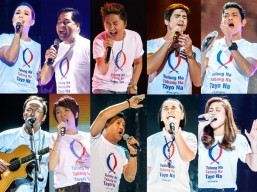 Songs of hope, unity and inspiration filled the recent sold-out, star-studded fundraising concert of ABS-CBN that gathered some of the country’s brightest stars, Kapamilya network executives, and almost 10,000 people for one cause — to help raise funds for the relief of the survivors of the recent calamities that struck the Visayas region.

“Tulong Na, Tabang Na, Tayo Na! An All-Star Benefit Concert” was conceived by ABS-CBN in less than a week and promoted to the public in just two days. It brought together some 60 ABS-CBN artists, singers, choirs, bands and dancers who all performed for free. Meanwhile, leading to the concert, ABS-CBN North America’s Sagip Kapamilya Telethon dubbed, “Magkasama sa Kuwento ng Pagbangon“, held at ABS-CBN International Corporate Headquarters in Redwood City, California last November 13-14, raised $311,927 in donations and pledges.  The TFC-led telethon was aired as aBalitang Americaspecial and was livestreamed on TFC.tv.  It was also seen on U.S. and Canada’s major cable systems that opened their TFC signal to millions of digital subscribers at no additional cost for a limited period so they can watch TFC’s special coverage on Typhoon Haiyan (Yolanda).

“The artistic heart is very big. It makes things like this possible when you have artists who are so generous,” said Tony-award winner Lea Salonga who, alongside Gary Valenciano and Piolo Pascual, led the opening number of the benefit concert at the Araneta Coliseum.

Among the concert’s highlights were Lea’s moving rendition of “Bayan Ko,” the hair-raising and Twitter trending interpretation of “The Prayer” by the shadow play performers El Gamma Penumbra; back-to-back heartfelt performance of inspirational singers Jamie Rivera and Fatima Soriano, who sang “Heal Our Land” and “Mahiwaga,” respectively; a high energy all out rock performance of OPM band 6Cyclemind that turned the Big Dome into a huge dance floor; and the “Hawak Kamay” performance of the whole coliseum, which symbolically glowed in the dark as everyone were asked to raise their mobile phones while singing along with the performers.

Also, ABS-CBN executives, led by Chairman Eugenio “Gabby” Lopez III and President and Chief Executive Officer Charo Santos-Concio, took part in the event.  In Hong Kong, ABS-CBN Global COO Raffy Lopezthanked hundreds for their support of TFC’s efforts to help Typhoon Haiyan survivors at the launch of the new TFC Load-n-Watch in the region in partnership with CloudFone.

During the concert, the newly launched ABS-CBN mobile announced that it is giving away over 100,000 SIM cards for free, along with relief packages, to the survivors of super typhoon Yolanda. It is also putting up free text and calling centers in calamity-striken areas until power and communication lines are normalized.

All proceeds of “Tulong Na, Tabang Na, Tayo Na! An All-Star Benefit Concert” would be donated to the calamity fund of Sagip Kapamilya, the emergency humanitarian assistance program of ABS-CBN Foundation.

Even after the concert, ABS-CBN continues its call for help to calamity survivors through its ongoing “Tulong Na, Tabang Na, Tayo Na!” relief campaign. To volunteer, donate or find a lost loved one in the calamity-striken areas of the country, visit ABS-CBNnews.com/TulongPH. For international donations, go towww.abscbnfoundation.org. Continue sharing the worldwide call for donation on Twitter using the hashtag #TulongPH. (Kane Errol Choa, ABS-CBN Corporate Affairs, Manila with reports from ABS-CBN Global)

WATCH THE CONCERT ON DEMAND ON WWW.TFC.TV

What to do with Tax Leins and Levies?

Six in 10 support citizenship for illegals