After 2,000 years, Easter lamb falling off the menu in Italy? 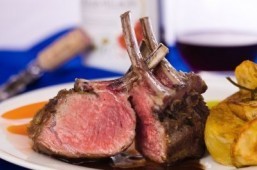 (Rome-AFP) – What could be more redolent of Easter than a sizzling piece of suckling lamb studded with slivers of garlic, crowned with sprigs of rosemary and roasted to a deep, golden hue?

It is one of the jewels in the crown of Italian gastronomy, an Easter treat born of nearly 2,000 years of culinary and religious custom.

Yet as this year’s celebration of the Crucifixion and Resurrection of Christ approaches, all the signs are that lamb is losing the broad appeal that had made it a symbolic staple of celebratory meals for centuries.

The country’s legions of carnivore gourmets, who are equally keen on chomping down milk-fed veal and herb-stuffed piglets, will fight hard to keep it that way.

But market data suggest a significant shift in attitudes has already taken place. According to the national statistics institute (ISTAT), the number of lambs sent to slaughter in Italy fell from 4.6 million in 2010 to just over two million last year.

Animal rights activists say the trend, which has accelerated in the last two years, reflects a groundswell of revulsion at the practice of dragging tiny lambs — and on a much smaller scale goat kids — away from their mothers and into the slaughterhouse when they are as young as four-weeks old.

Rome butchers Massimiliano and Pino Marabitti beg to differ. “The animal rights lot are worse than Islamic fundamentalists,” Massimiliano says indignantly from behind his stall in the market of the Trieste neighbourhood.

“What difference does it make if you kill an animal at six weeks, six months or six years?”

The brothers confirm that lamb sales have fallen off significantly but blame a struggling economy rather than animal welfare concerns.

“More and more what we are seeing is all types of meat being imported from eastern Europe where they don’t have the same health and hygiene controls we have here in Italy,” Massimiliano adds.

“People are short of cash so they go to the supermarkets and buy that meat instead.”

An opposing view is expressed by Silvia Fassetta, one of the founders of The Green Place, an animal refuge near the spa town of Nepi which is home to two of the brightest young things on the Italian media scene.

Rescued lambs with all the cuddly charm of puppies, Elvis and Lina were the stars of a recent online poster campaign in which Italian actors, musicians and TV personalities were snapped holding them under banners urging readers to: “Make a sacrifice this Easter, don’t kill me.”

Backed by Italy’s Anti-Vivisection League (LAV) — one of the biggest animal rights groups in Europe with 40,000 members or donors activists — the campaign has been a slow-burn success with the images widely picked up by national newspapers.

Fassetta says that is a sign that her arguments resonate in a country with an estimated five million vegetarians and millions more who take a keen interest in how their food is produced.

“Most of the fall in consumption has come in the last two years and I saw the other day that one of our biggest supermarket chains is offering a 50 percent discount on lamb. If they are doing that in the run-up to Easter it means that our message is getting across,” she told AFP.

“Personally I would prefer people not to eat meat at all, but lamb is a good place to start,” she says, cradling Lina in her arms.

The story of how lamb came to be associated with Easter is as rich as the fatty juices oozing out of a prime joint reared on fragrant Sardinian hillsides.

The gospel of John describes Christ as the “lamb of God,” — a reference generally interpreted as comparing him to the sacrificial lamb of Jewish tradition.

As the Jews sacrified a lamb each year at Passover in commemoration of their liberation from bondage in Egypt (when lambs’ blood was painted on Jewish doorposts as a sign for them to be spared from God’s killing of every first-born son in the land), so Christ was sacrificed by God, his father, so that sinners could enjoy everlasting life.

The sacrifice part of the Passover ritual died out as Jews were scattered around the world but the commemorative eating of lamb has remained common in some communities, including the one first established in Rome in the second century.

Despite their small numbers and centuries of persecution, Rome’s Jews have had a big influence on the Italian capital’s cooking which has helped to sustain lamb as a feast-day favourite.

Theologians say there is nothing in the Christian scriptures to support a notion that lamb should be eaten at Easter. Campaigners regularly urge Pope Francis to spell that out, but he has so far declined, limiting himself to speaking in general terms about the importance of treating all creatures with respect.

Alibaba opens US data center in new challenge to Amazon

EU lags behind on 4G: official