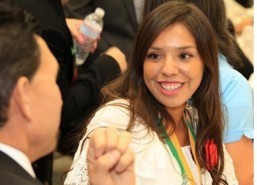 “As the daughter of field workers, I knew that the only way to get ahead in life was to earn an education. Thanks to Edison, I am.”
– Diana Valenzuela, Edison Scholar
(photo screenshot courtesy of http://www.edison.com/)

Students will learn of their scholarship award April 11-15 when SCE staffers make notifications that will include surprise visits to some schools.

“Congratulations to these deserving Edison Scholars,” said Janet Clayton, senior vice president of Corporate Communications for Edison International and SCE. “Their academic excellence has earned each of them a $40,000 scholarship. We wish them continued success as they pursue studies in science, technology, engineering or math.”

Since 2006, Edison International has awarded $5.3 million in scholarships to520 students in its service territory.

Edison Scholars are also eligible to apply for summer internships at SCEafter completing their second year of college.

Edison International (NYSE:EIX), through its subsidiaries, is a generator and distributor of electric power and an investor in energy services and technologies, including renewable energy. Headquartered in Rosemead, Calif., Edison International is the parent company of Southern California Edison, one of the nation’s largest electric utilities.

Gluten-free diet could improve symptoms of autism in children: study

JJ Abrams to recreate the robots of ‘Westworld’ for HBO