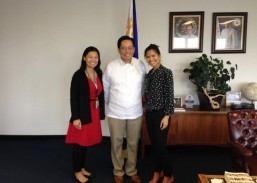 Consul General Herrera-Lim, Dr. Javier and Ms. Cruz discussed the importance of having more collaborative activities to support Filipino parents and families here in Los Angeles.  Dr. Javier also announced an important study that Children’s Hospital Los Angeles, USC Keck School of Medicine and SIPA are partnering on.  Although Filipinos are now the largest Asian subgroup in California, few programs have been developed to support the specific needs of Filipino families.  Dr. Javier is inviting Filipino parents of children ages 6-12 years old to contact her if they are interested in learning more about high quality programs aimed at addressing raising kids in the United States and how to bridge the cultural gap.

Monetary compensation will be provided to eligible parents who participate.  This study is funded by the American Academy of Pediatrics Community Access to Child Health (CATCH) Program and the Eunice Kennedy Shriver National Institute of Child Health and human Development at the National Institute of Health.  Interested participants should get in touch with Dr. Joyce Javier at the USC Keck School of Medicine.